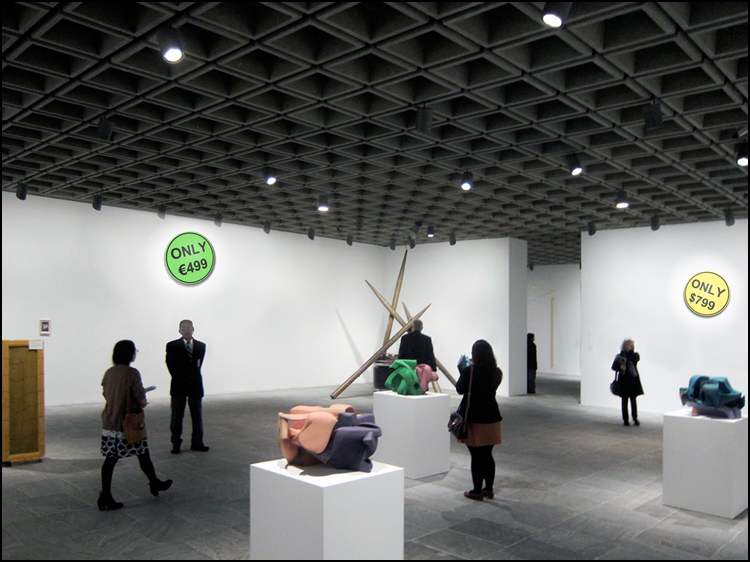 Installation View: LG Williams / The Estate of LG Williams™, Only €499 (left) and Only $799 (right), at The Whitney Museum of American Art: 2012 Biennial Curated By Elisabeth Sussman, Sondra Gilman, and Jay Sanders, thru March 1 through May 27, 2012 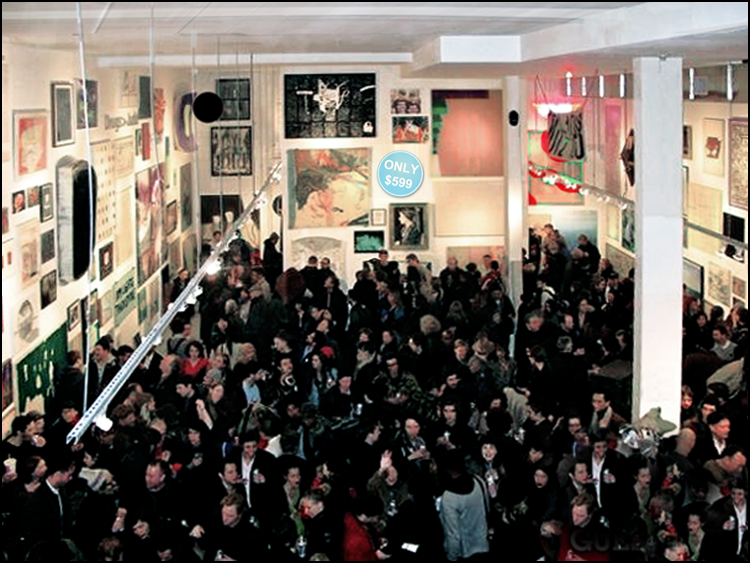 .
La Stampa | Art News | Artissima Is Sleepy, But It Can Wake Up With Impertinence As Is The Case With LG Williams Of Super Window Project | http://bit.ly/vwVl37 (PDF)
Source: http://bit.ly/ujiiPh

ArtInfo.com UK | Artissima: “I like the intellectual flavor of the artfair,” said Baron Osuna, who is showing works by LG Williams | http://bit.ly/uMk05R (PDF)
Source: http://bit.ly/tOKxiu

.Eli and Edythe Broad standing in front of a recent purchase, LG Williams / The Estate Of LG Williams’ 2011 painting, Cracked But OK! (Or, It Might Be Perhaps Better To Say, This Is Such A Gentlemanly Thing To Do-Do…) #09, 2011. Photoshop Credit: The Artist
.
FOR IMMEDIATE RELEASE

Phoenix, Oct. 12, 2011 — Billionaire philanthropist and art collector Eli Broad has purchased LG Williams / The Estate Of LG Williams’ 2011 painting, Cracked But OK! (Or, It Might Be Perhaps Better To Say, This Is Such A Gentlemanly Thing To Do-Do…) #09, for an undisclosed amount (some say $240,069) from FUCKTHATGALLERY in Honolulu, Bloomberg reports.

Broad’s California art foundation bought the work to add to its 1,300-piece contemporary collection, which doesn’t feature any other Williams pieces, “this is one of his ‘signature’ works, so there will be many other purchases to come” the collector said.

Broad said the painting’s fate along with the rest of his art holdings has yet to be decided, but the collection would be divided and doled out to institutions that needed the specific works. However, he added, the Williams piece is going to remain over my bed, “because I understand plywood and plywood has been good to me” the famed real estate developer reportedly quipped.

The Cracked But OK!, a 4 x 8′ Chip-board panel screwed to the wall, is one of thirty-five, Broad said. “There’s is now only thirty-one left. And they will cost more after they are all sold.”

Broad, a founder and former CEO of KB Home and SunAmerica Inc., paid $11.8 million in May for a 1962 Warhol painting of a Campbell’s soup can; and $23.8 million last November for a David Smith Cubi sculpture, the highest price ever paid for a contemporary artwork sold at auction.