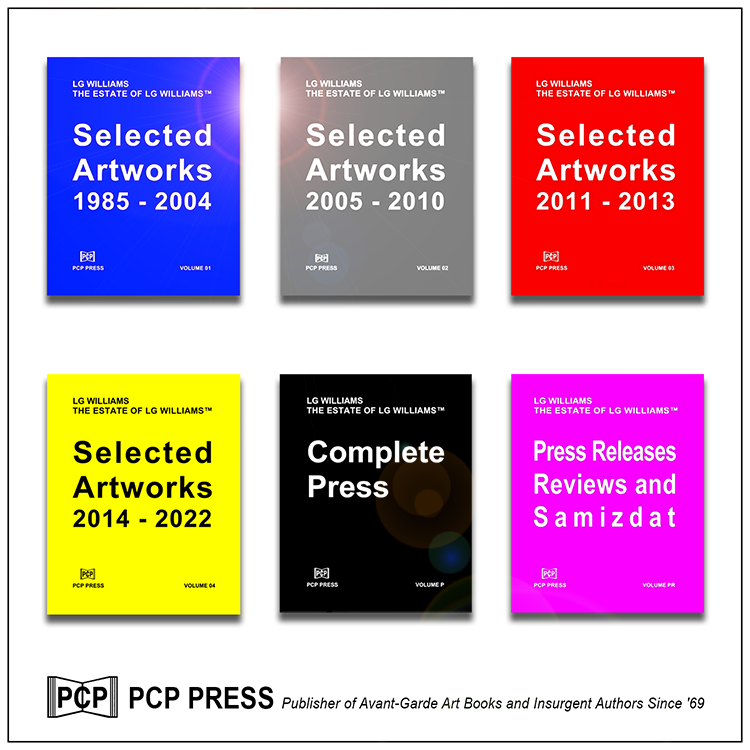 PCP Press is pleased to announce 6 new volumes exploring the art of LG Williams between 1985 and 2022. All 6 volumes are now available on Amazon.

LG Williams is a Los Angeles artist and an Endowed University Instructor at The Academy of Art University, and recently The Robert Hughes Distinguished Visual Artist-In-Residence at The Lodge in Hollywood, CA. Williams’s artistic practice spans many artistic disciplines, including art criticism and art history.

Raymond Pettibon’s writings embraced the expanse of social-media digital technology while allowing a more intimate glimpse at the artist. Between February 2011 and February 2021, Pettibon posted something in the region of eighteen thousand digital comments on Twitter.

SCKONTHIS!!, Tuff Luyv, and my fists r free are 3 books based on the entire transcripts that appear here for the first time.

This eclectic collection demonstrates the range of Pettibon’s thinking as he embarks on an artistic enlightenment project. Pettibon’s digital writings reveal the artist in a creative-informal rather than critical-formal mode. They flesh out ideas elucidated in his artworks, none of which are represented here.

The twits cover topics as varied as golf, oral, life, and art history—subjects chosen at random for broad appeal andexamined with passion and insight.

We had the good fortune of connecting with LG Williams and we’ve shared our conversation below:

LG, what is the most important factor behind your success / the success of your brand?

“At the Enchanted Hunters Senior Retirement Village (overlooking Forest Lawn atop the Hollywood Hills), I’ve now scrapped Post-Performative Art—to become ‘The Distinguished AARP Resident of Neo-Post-Performative Art.’ I’m thrilled. By the way, this artistic accolade is one of the most unusual and elevated leisure distinctions found in today’s expansive Senior Living communities. I finally feel I can make my dreams and passions come alive. I’ll tap into my unlimited creative potential after Bingo night in this vital role—just like in the Hollywood movies…” 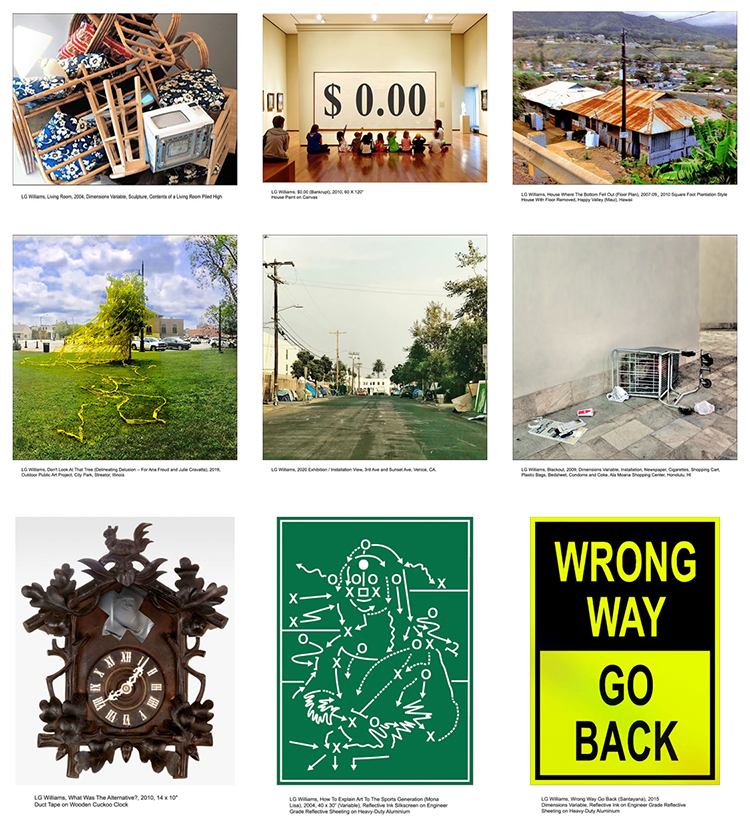 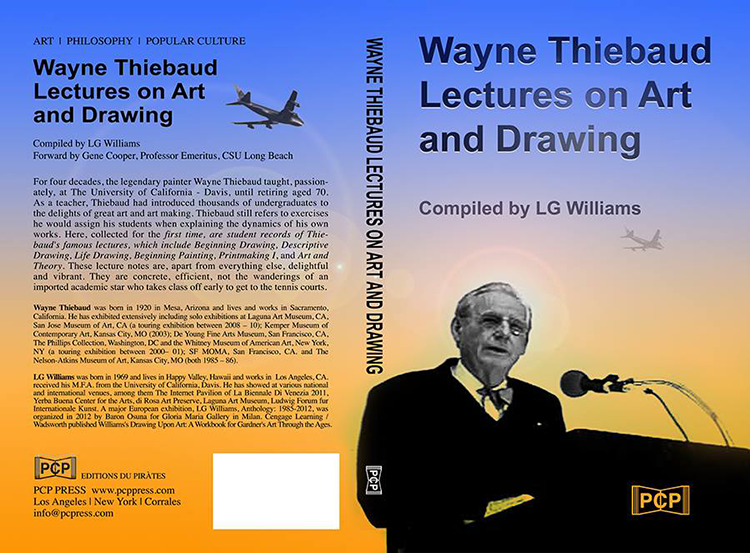 .
Wayne Thiebaud Lectures on Art and Drawing
Compiled by LG Williams
Introductory Essay by Gene Cooper
272 pages, PCP Press
1 edition (February 23, 2018)
ISBN-10: 1985865432
.
For four decades, the legendary painter Wayne Thiebaud taught, passionately, at the University of California Davis, until retiring aged 70. As a teacher, Thiebaud had introduced thousands of undergraduates to the delights of great art and art making. Thiebaud still refers to exercises he would assign his students when explaining the dynamics of his own works. Here, collected for the first time, are student records of Thiebaud’s famous lectures, which include Beginning Drawing, Descriptive Drawing, Life Drawing, Beginning Painting, Printmaking, and Theory and Criticism. These lecture notes are, apart from everything else, delightful and vibrant. They are concrete, efficient, not the wanderings of an imported academic star who takes class off early to get to the tennis courts.
. 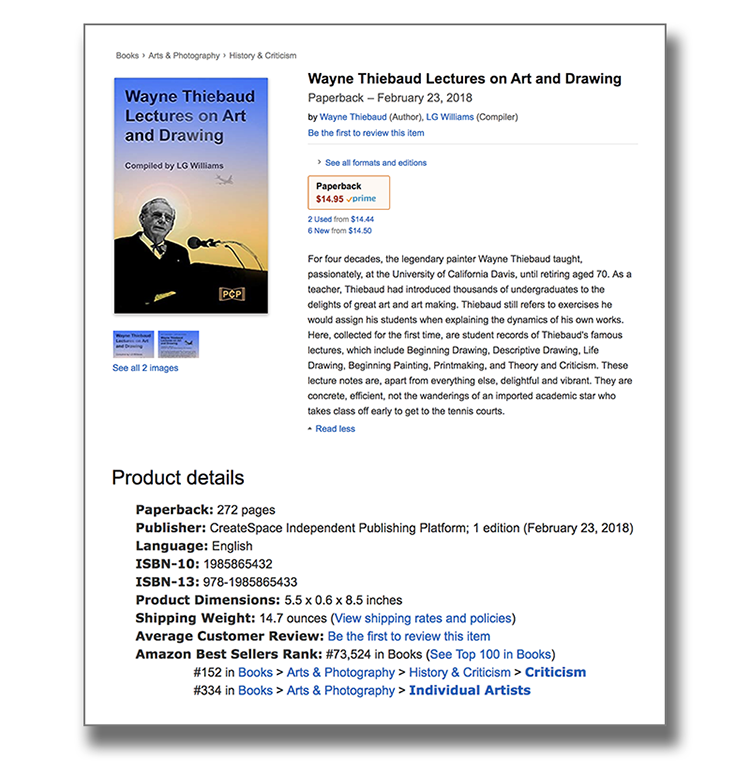 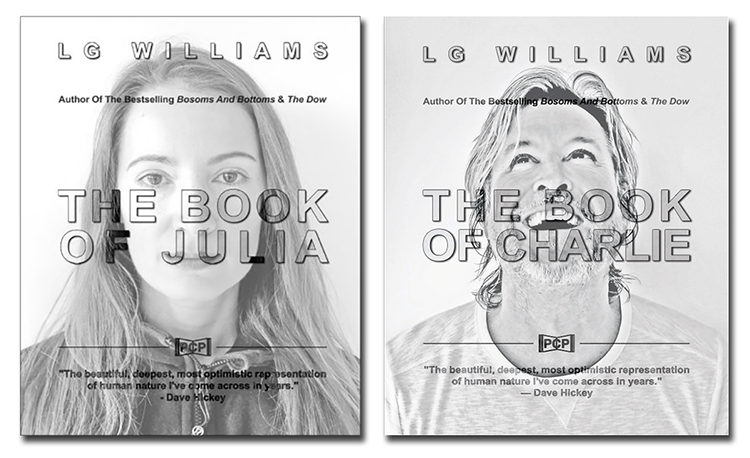 The Book Of … is a series of photography books by American artist LG Williams. The Book Of [Your Name Here] series, originating in January 2015, is an artistic re-examination of the “miracle” of the daguerreotype photograph, in which the artist reaches back to the birth of photography.

On August 19, 1839 the French Academy of Sciences announced the invention of the daguerreotype by the scene painter and physicist Louis-Jaques-Mande Daguerre (1787-1851). Word of the discovery spread swiftly, and the daguerreotype photography enjoyed great popularity until the 1850s, especially in America where the process was free from patent restrictions.

While there was great demand for portraits captured by the “miracle” of photography, early daguerreotype technology had its shortcomings. The necessarily long exposure times that were required to capture an image, fifteen minutes on average under bright lights, led to necessarily inevitable lacunae in representing the subject. The resulting single image daguerreotypes are de facto composites of the lapsed long exposure time, but not, as was purported, scientifically captured replicas of both time and image.

This publication and series presents an opportunity for Williams to provide an artistic, political, and social perspective on the missing truths, images, and loss of time that occurred during the age of Daguerre. In other words, each book from this single-portrait-series consists of hundreds of continuous images during a fifteen-minute stretch of time, or just about as many images as the artist could take as fast as possible using his out-dated FujiFilm FinePix Z70 3-MP Digital Camera. From this historical perspective, Williams’ series points to the limitations of daguerreotype photography with the seemingly limitless possibilities of contemporary analogue-image capture and production.

The books are published by PCP Press and available on Amazon.com. 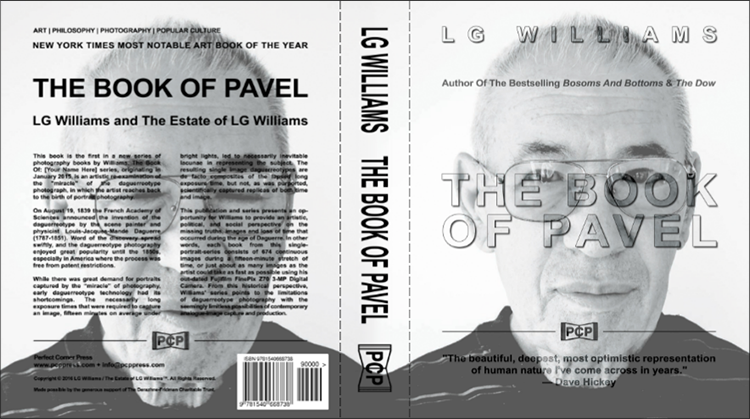 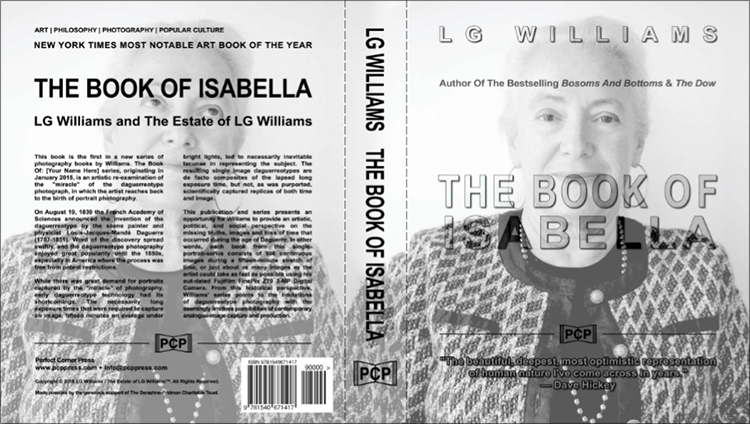 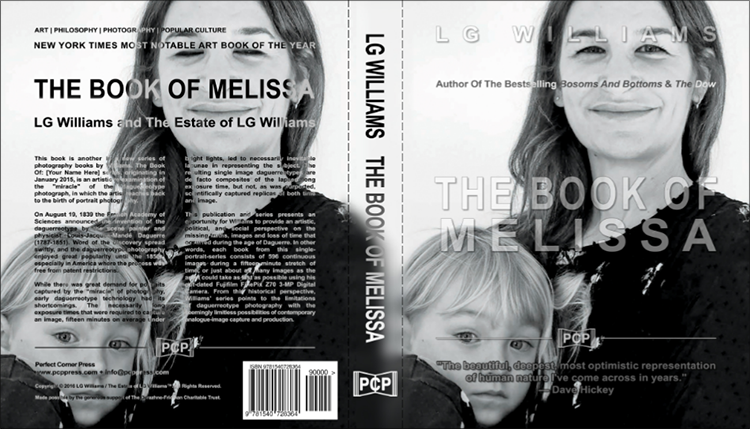 Many other reviews can be found at PCP Press:  www.pcppress.com

Below: Watch Dave Hickey and Julia Friedman discuss the 2 books at UCLA The Hammer Museum.

Below: at SITE Sante Fe

More information can be found at PCP Press:  www.pcppress.com

FOR SALE BY ARTIST (2013) by LG Williams / The Estate of LG Williams in
Night Gallery’s publication Night Papers IV, Summer 2013